I just stumbled across this awesome video showing you some genuine Karl Gotch bodyweight training. It’s Gotch taking a wrestler through a couple different exercises, you probably haven’t see before.

It looks like this came from a video titled Conditioning for Combat Sports.

There’s some really cool exercises in here that are worth discussing. 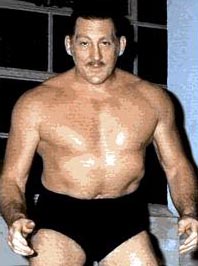 The first exercise is similar to a muscle up except Karl Gotch is holding onto the wrestler’s feet. This makes it less weight but take some more back flexibility in the bottom, and then more of a pushup at the top rather then a dip.

The second exercise is similar to the first, but likely even harder. Starting with a mixed grip on the pullup bar he does something like a twisting pull to push, again like a muscle up. From this position it must be tricky.

I tell you, the next time I’m with my training partner I’m going to try these out.

Finally we have an exercise you are likely familiar with the dip. But then a variation is shown with the hands pointing the opposite way. From my understand Karl Gotch was a big believer in working out of all sorts of hand positions, and legs too, because for wrestlers this is essential to be able to exert strength from any and all angles.

(On a sidenote it’s something I really like about kettlebell juggling too.)

This is also great to do for the average person. Too many people work in just straight lines and in well set grooved paths. I’m all for that, as that’s what it takes to go far with any one exercise, but it’s better for the health of your body, and your overall functional strength, to work in many different positions. If you take one thing away from this article, it’s to work outside the box.

Karl Gotch also had a lot more bodyweight exercises to teach. He was a huge proponent of these and didn’t really use weights (although he swung some clubs around). He taught Matt Furey many of the exercises that made him famous including the Royal Court including the Hindu Pushups and Hindu Squats.

For many more ideas on bodyweight training check out my Advanced Bodyweight Training Course.