Over the past few months I’ve been specializing in working with a number of people on injuries they have.

First off let me say I’m not a doctor. Truth is, my anatomy skills, aren’t even the best. If you ask me about muscle attachments you won’t get very useful answers.

I don’t diagnose or treat, I just like to share self-help methods with them. Specifically, I have studied a number of alternative methods, most notably here Energy Psychology. And in this article I want to share a few stories with you. Injuries are interesting…especially chronic ones.

The human body is amazing at healing, and yet, at times pain can stick around for a whole lifetime.

While every single cell in your body is being constantly replaced, this injury and pain remains. No cell you have right now existed 7 years ago, yet a “bad joint” can be there for 20 years.

So why don’t things always heal?

And if you look at strength training of any type, beyond bad programming, injuries are the things that hold people back more than any other.

Yet at other times you get injured and then heal without any future ill effects. The body does its job without flaw.

Ever see a kid bounce back from a heavy fall as if nothing happened?

Chronic Pain and Injury or Accelerated Self-Healing…What’s the Difference?

And is it possible to move from one to the other, even if you’ve been stuck there for years?

To understand this you have to understand that its not just a physical injury, but how we think and feel about it plays a big role.

The physical cannot be divorced from the mental and emotional.

Case in point. I worked with a woman the other day who suffered from shoulder pain for about 8 years.

We worked on when it happened on the basketball court, and re-injuring it in a couple car crashes later on by focusing on how she felt at those events.

At the end of the session the pain was gone. 100% gone and it hasn’t returned.

I’m always amazed when it works that well. Unfortunately, while I’m finding it always works to some degree, its not always quite that successful.

For whatever reason, she had “decided” from those three events that this needed to remain a problem. And by her deciding I mean her subconscious body, definitely not a conscious decision.
And when these past “decisions” were dealt with, it went away.

It appears that occasionally the only thing holding a physical injury in place is your mind and emotions. Remove those and you’ll find the physical machinery works perfectly well.

Other times you’ll have to back it up with some physical rehab (which now works when it doesn’t before, or at least better).

Like in this case. A guy came to me with his shoulder injury (those sure seem common don’t they?) just a couple weeks ago.

His story was interesting. Lots of issues surrounding this one, and I won’t bore you with the details, but he had problems with his right shoulder for over 15 years.

It held him back from something he loved, baseball, as well as getting into something new he enjoyed, handstand pushup skills.

Surrounding this issue were some deep feelings of guilt, shame and more. Parents try their best, but often cause bigger mental and emotional trauma, far worse than a physical injury could.

Here it wasn’t a spontaneous fix. But it has gotten significantly better. Here’s what he said:

“The shoulder has felt nice (to a point)…The rotator cuff area seems to be tightening up (in a good way). Anyway, with the release of the rear shoulder pain and lack of constant grinding, I’ve began having awkward pops and catches in my chest where I broke the cartilage (a sensation I haven’t felt in over 10 years!). The mind is a tricky thing; I really feel better having gotten that stuff off my chest and I’m pretty sure I could talk about it with others now (I wouldn’t have been so sure a few weeks ago). I also qualified 5 balls and really overcome some serious plateaus in my 3 club practice since our conversation.”

I could tell you story after story…

How I helped my brother with his back. Two days later he told me he was able to do a workout that literally would have crippled him in pain before, and now there was no problems.

Or another lady and how in five minutes what seemed like a structural issue disappeared.

I personally and frequently use this myself. It was an integral part of fixing my inflexible wrist that held me back from hand standing, a story I’ve told many times.

Here’s the great news. Using energy psychology to help with injuries is just one of its many uses.

It’s a great quick and easy tool for instantly adding more confidence to any exercise.

This was the method I used to change a belief regarding freestanding handstand pushups and went from struggling to do one rep to suddenly being able to do three. It took less than a minute to do.

In this months Strength Health Mind Power Inner Circle I introduce you to this method and how to use it.

In coming months I’ll be going deeper into all of its uses in order to increase performance.

If you’re not a member go here now to sign up. In addition to this jam-packed issue you’ll also get My System. 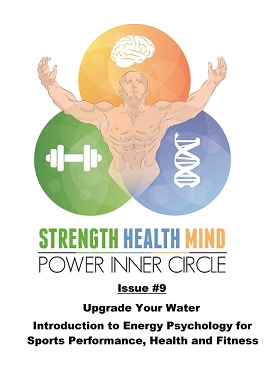