It’s funny the things that we forget. I knew that reading about the Mighty Atom was a huge influence in my life. In fact, I would say it steered the direction of my life for the better.

I read that book and said to myself, “I want to be that strong.”

…And so I set out to become exactly that!

Not too long after that, I trained with Dennis Rogers who was the student of Slim the Hammerman who was the protégé of the Mighty Atom himself. 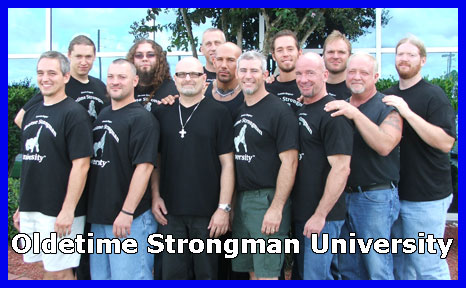 Despite it being such an influential book it was years since I re-read it again.

I pulled vehicles by my hair because the Atom did so. If he did it, why couldn’t I?

What I forgot was that the Atom pulled a firetruck which looks quite similar in appearance to the one I did. And in re-reading this book I was reminded just how much the Atom was into clean food, healthy living and the use of herbs.

I was steered in this direction by him, but totally forgot about it.

As a “pitch man”, after Vaudeville had died out, and thus his career in it, he sold products of his own creation for many years.

His soap was made simply from lemon, coconut oil and castile.

In fact, here are some real coupons from the Atom’s products that Dennis’ sent me as a gift. And there’s likely a whole bunch of his use of herbal products that is lost to the sands of time.

I’m a big proponent of herbs and sell my own too at Super Man Herbs.

A thought occurred to me. It would be fun to “re-make” one or more of his formulas. Since I have suppliers and contacts it might be doable.

I was thinking of doing the liniment. Is that, or anything else he made, something that you would be interested in? Please comment below.

The Mighty Atom was one of the original health advocates. Here’s a couple of lessons on health from the Atom that you still hear echoed today…

“Anyone can wash with soap and water, and think they’re clean. Nonsense. The only real cleanliness begins with INTERNAL CLEANLINESS. And when you practice that, the rest is easy. Why you eat right, you feel right, you live right, you think right. You enjoy life in the right way. And this internal cleanliness aids the chain reaction of mental, spiritual, as well as true physical cleanliness. A human being should empty his bowels at least once a day. Cleansing of the bowel is a foremost preventative of sickness, and has ramifications in every area of human activity.”

“Our colds are caused by what we eat…caused by mucus-producing foods. If you ingest these substances, your body will accumulate mucus until it must be discharged. That’s really what a cold is, a cleansing process. That runny nose is more the result of what you’ve been eating than anything else.”

“Sugar is not a food. To put it bluntly, it is a death food. It has no vitamins. It will sustain neither life nor well-being. The opposite is true. Sugar has become a drug. It’s habit forming.”

Living healthy was an important part of being strong to the Atom. It’s the same for me.

Sure, you can get around the health aspect and still become strong without it, if you’re young and genetically gifted.

But if you’re looking at the bigger picture it can’t be done. Besides “strength” is not merely about the amount of weight you can lift either. Make sure your health comes first.