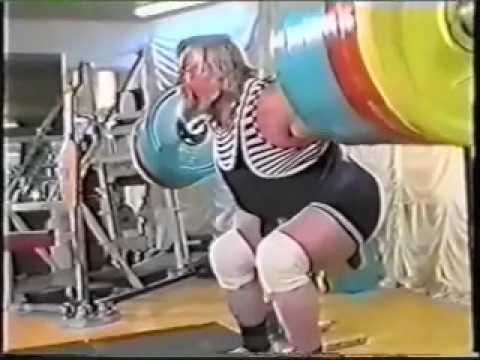 Valentin Dikul is, in my opinion, one of the greatest athletes ever to grace the earth. Here is a short biography from one of the following videos: A circus acrobat, Valentin took a bad fall and broke his back when he was seventeen. Dikul said no to the wheel-chair and painstakingly rehabilitated himself, largely with the help of his trusted kettlebells. But he did not stop there. He proceeded to become a great circus strongman juggling 80kg kettlebells and a powerlifter with mind-boggling lifts at sixty-something years of age!

He is known as the “Maestro” and helped other to overcome back injuries at his clinic with his Dikul Method.

While there is some debate as to the legitimacy of his possible records, there is no doubt that this is a very strong man. Here is a video of his Guinness World Record of 450kg/990lb Squat, 260kg/572lb Bench, 460kg/1012lb Deadlift for a total of 2574 Pounds!

This video shows a strongman feat of squatting up then push pressing a few times two bicycles ridden by two people. Great for any performing strongman.

The following shows some of his juggling with very heavy kettlebells and steel balls in a circus act.

And lastly another feat from his circus act where he supported a car on his shoulders.

Valentin Dikul is not well-known, but he should be. For performing strongmen he would be one to study. For anyone that wants to be strong it would be wise to study his methods and perhaps you can achieve some of his results.