In a recent message, I discuss that fast vs. slow training, wasn’t really important. Sure, there are some specific instances where one may be better than another, but the fact is you can make progress either way.

Thus, it is not one of the very important aspects of training, compared to something like progressive training, or mental training. If you don’t have either of these right (and I’m talking the bare minimum, not even close to ideal) you will not get results.

Ricky followed up with another question…and I want to slaughter that idea too.

“What’s all the secret anyway? JUST listen to your own body? How do you know your form is good then if it can even be bad when moving slow?”

What I’m covering here is the assumption hidden behind his questions: Ask yourself this question right now. What is your answer?

Every trainer, every coach spouts this myth off, and then the parrots repeat it back to other people.

But not me (and a few select others).

And I can prove it to you very simply.

Therefore, hurting yourself cannot be all about form.

Even one of these ideas alone, destroys the foundation on which this “rule” stands.

You probably either have experienced one or both of the above yourself, or know people who have as well. (And be careful that people are quick to blame bad form as the causative factor, not because it was, but because of the belief that it was. Those beliefs can be tricky things.)

Does anyone want to argue these two facts?

And I know what you’re going to ask next:

“Okay, if safety is not about form, what is it about?”

It is about your body being able to handle things structurally, whether in what is called good or bad form.

If something goes beyond the limits of what your body can handle, that is when things go wrong.

Now “form” can be used to keep a body within a certain constrained plane of movement. And if you move outside this “form” you may move into a place where your body cannot handle it. This is true. Yet, this is where the misconception stems from, saying that bad form is what caused the issue. But it is not the cause.

The form nazi’s will say you’re doomed if you get outside of what they say is ideal form, with a perfectly neutral lower back. This is proper form. If you do anything outside of it you’re being improper. And if you haven’t hurt yourself yet, you will be a cripple in old age, because their belief says so!

(It’s funny that the definition of improper is “not in accordance with accepted rules or standards, especially of morality or honesty.” It is funny because, while improper can mean inaccurate, it is largely a moral opinion. Hence, the form fascism.) So, do I recommend people round back deadlift? Not necessarily. My structure being able to handle it, was built up over time, and started small, where the body could handle it.

In general, I don’t disagree with many of the tips for so called proper form in deadlifting. But to extrapolate that as to form being the cause of hurting people is inaccurate.

My body is structurally capable of handling “bad form” and doing so safely without getting hurt. If you understand these principles, then do I recommend you do it? Sure, go for it!

This is just one example of the fact that you can be in what is considered bad form and not hurt yourself.

Here’s another example. Imagine you’re doing a back squat with an empty barbell on your shoulders. Take your time and do it in the most perfect form you can do it in. Easy enough, right? And no pain or injury (unless there’s a preexisting issue.)

Imagine again the barbell on your shoulders…you still have good form…except that now it is loaded with 5 tons (10,000 lbs.) of weight. What would happen? You would get hurt. You would probably get crushed and die.

Why did this happen? You had good form, didn’t you? But you overloaded what the body structurally was capable of handling. Sure, as your knees would buckle one way or the other, your spine would too, and you’d move through very bad form as the weight collapsed your body. But, and this is important, the form did not cause that.

I recall the story of friend and strongman Adam Glass. At a kettlebell certification, the teachers instructed him on how to do the kettlebell swing in what they called the ideal form. The proper form. You don’t want to be an immoral kettlebell lifter, right?

When he did this, something in his body popped and he was in pain.

In this case, the “good” form imposed from the outside, is what his body couldn’t handle structurally. This “good” form caused him pain. The moral argument for form is a dangerous thing.

These are two examples of the fact that you can be in what is considered good form and still hurt yourself.

What Form is Actually About

For these reasons, I do not think about form as what will or will not protect me from injury. Instead I look at form as the means to do something or not.

And because we have technically agreed upon definitions, of what an exercise is or is not, or the ideal form of what something should look like because it is aesthetically pleasing (once again, not safety), the form lets you know if you’re accomplishing that or not.

In holding a front lever, you want to hold the body completely straight. A slight pike in the hips, or rounding in the back, is not the ideal form for how it looks. But these slight modifications make the exercise easier, and you generally need to do them as you’re working towards the ideal. Your “sloppy form” is a form of progression, not safety, nor lack of it.

How to Avoid Getting Hurt

Recall that I said that this is about your body being able to handle things structurally. Hopefully, that all makes sense now, and you understand the rightful place for form.

The question now becomes, “How do you know what your body is able to handle structurally?”

It’s quite simple. Your body will tell you.

Simple…but not easy. There is a problem with this. We’re not taught how to “read” the body. If it’s “speaking” and we’re not “listening” we have nothing else that can guide us. This is likely why people adopt the belief that form is their protector, despite the contradictory evidence that is plainly there.

This stems back from when we’ve labeled the body as a dumb machine, and the brain as fully in charge. This false paradigm is the foundation on which this fallacy of form was built. That form should be led by a detached observer, rather than yourself.

That’s not my paradigm. Instead, our bodies are intelligent. Your body is constantly communicating to you. The dumb ones are not our bodies, but the conscious minds, as we stopped listening!

Goethe said, “It makes a wonderful difference whether we find in the body an ally or an adversary.”

Make your body an ally. That’s what you do by listening to it. (Hell, I think I might even prefer the adversary to a unintelligent sack of meat and bone. )

Because we have to rewrite all this internal programming, and basically learn a new language, it takes a bit of time and effort. But it can be done and it is very much worth it.

I cover this inside Beyond Biofeedback: The 4 Levels of Intuitive Training. I see this as the foundation for being healthy and moving well. 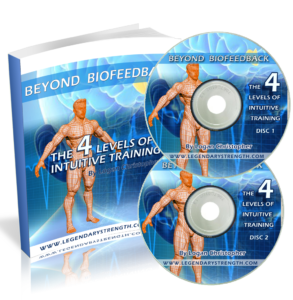 This is not form coming down from the mountains on stone tablets. This is you listening to your body…after all that is exactly what you want to move well, be strong and pain free, right?

Not only can this help you avoid injury, but reverse those you have, as you body is the guide to doing so. It is not the doctor, not the drug, not the physical therapist that heals. It is the body that does so.

Questions? Comments? Leave them below…